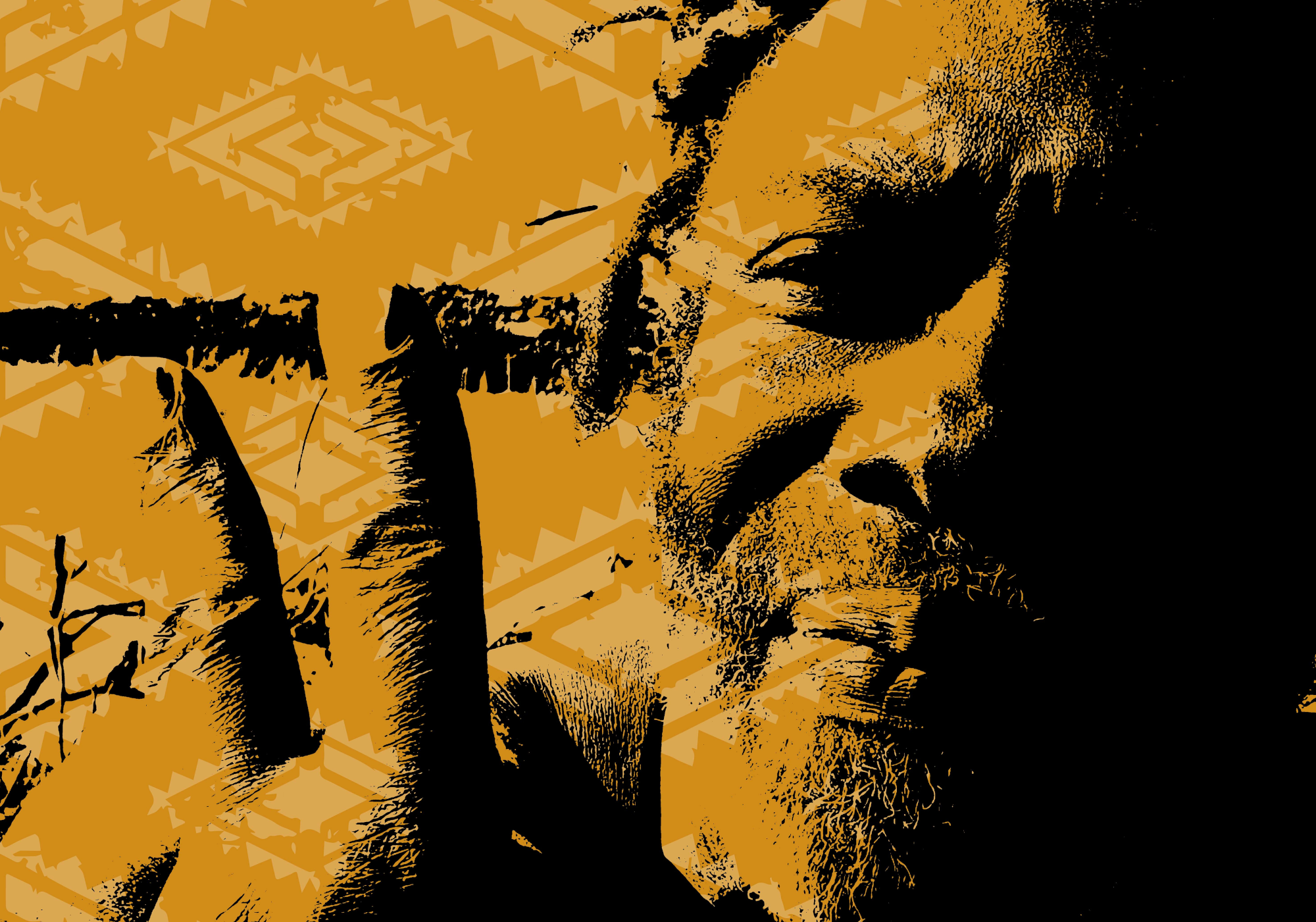 To kick off 2022 we’re starting with an album feature. Not just any album, but one that we feel very privileged to have had shared with us. This is a significant album that will now soundtrack our 2022.

You may be familiar with Larry Maluma, a Melbourne-based Zambian artist, who we last year featured discussing tracks off a recent EP that included Bush Doctor/Traditional Healer and Babylon System Stinks.

Today, as we collectively wonder where January went, we are spinning Larry’s album and thinking about ‘Justice.’

What does that word mean to you? It’s a word that means different things to different people.

One thing I love about this ten-track album which became apparent on the very first listen is that not only is it musically very very good, (good, of course being a word that is always subjective), but it is an album that really illustrates perspective.

Perspective, as you may have noticed, is something we love here at Paradigm O. After all, what would be the point of ‘our media’ if ‘our media’ are not representative of a diversity of perspectives.

From the first track, the perspective is so thorough that I feel like I’m being transported to another world. I feel like I’m in Zambia, somewhere I’ve never had the opportunity to go.

Gather Around is the name of the opening track and it makes you want to do exactly that. All I want to do when I listen to this song is gather around and dance to the infectious beat that is present.

‘Everybody come together if you want to know what’s going on in your area’ sings Larry, and this song perfectly embodies the spirit of localisation that is now being talked about as the antidote to globalisation.

Localisation is what we need to do in order to come back to living off the land and living in harmony with each other. ‘Gather Around’ is a localisation call to action for everyone, no matter where they live.

Mizeezo Ibotu (Good Ideas) is just as infectious in terms of rhythm and melody, and we now hear Larry singing in language. Again, I am transported to another world. One where live percussion, horns, and intricately woven instrumentation meld into a melodic tapestry.

The arrangement, instrumentation, melody, vocal delivery, and production quality are nothing short of sublime. You can tell that everyone who has worked on this record has done so with passion, vitality, and an uplifted spirit. The emotion that I feel when listening is one of hope and unity.

Next, we come to Bush Doctor / Traditional Healer which you might be familiar with, and today Larry has released a wonderful lyric and music video to accompany the track and the release of the full album.

Here we are treated to some insight into the record-making process, and the video doubles as a lyric video, pointing out these poignant lyrics that we have come to love about this track in particular.

Masika (I Have Arrived) is sung in language, and at 36 seconds in the chorus drops with an addictive melody and Larry singing ‘I’m on my way’, in English by contrast to the other parts in his mother tongue, and I’m hooked. This melody is a hook, and as a listener and a music fan, this is exactly the moment in music I am looking for.

The delivery and tone of ‘I have arrived’ is something that I can relate to on a personal level too, and this has fast become not only my favourite song of the album but perhaps among my favourite songs of all time. Already.

Inside My Head is unexpected, right from the first moment of the intro: an almost Celtic sounding instrument, possibly violin or viola repeats a melody while gorgeous acoustic fingerpicking leads to the first vocal line, one that embodies the perspective of the artist.

‘When I think, I think in African. When I dream, I dream in my mother tongue. But when I speak, I use English.’

‘Nobody knows what’s going on inside my head’ sings another vocalist, one that I think I recognise from the outro of Bush Doctor / Traditional Healer.

As a song, I feel this speaks to anyone who lives in more than one language and also paints a picture of what life must be like for the multilingual for those of us who only know a single language.

So much of human interrelationship depends on communication, and perhaps the reason we struggle with unity as a species is that things become lost in translation.

This song is especially worthy of spreading and sharing on this basis.

Aisha (Uncle) changes up the vibe and the groove. It’s got me bopping at a different tempo, and the slightly off-kilter beat is especially funky. Again we hear from Larry in language. There’s a dance between Larry’s vocal and the wind instrument.

I don’t know the story, but I imagine it is one about an uncle and one I look forward to hearing from Larry if the opportunity arises.

Time is up for the evil forces, says Larry, and here at Paradigm O we agree. Time to unite. This is the time for ‘you and I’ … I can’t help thinking, there’s a ‘u’ and ‘i’ in unity

As Drive begins we’re taken to another place entirely, a chill space. The vibe is something I could imagine being on a chill-out sessions mixtape or similar. It’s almost meditative, even as the beat and brass kick in.

It is, indeed, a song you could drive to, and just drive and drive towards the horizon. It’s not until the track ends that I realise it is an instrumental, and by that point, I have been lulled into a relaxed state. Just what I needed. I think I’ll put this on when it’s time to meditate.

Kondipa (Give Me) is another song that is sung in language. Again we hear the string instrument and vocalists we have heard in other tracks but in a different way. Each song on this album stands apart from any other and there is always something unique musically to each track.

Finally, we come to Leka Booza (Stop Lies), a bouncy sounding track that turns from major to minor at the moment the intro gives way to the first verse and I’m drawn into the world of the song. This dance between major and minor is what gives this song a really unique feeling as well. The dynamic between the two different feelings in the song keeps you intrigued, while the steady beat keeps you toe-tapping and the ‘la la la’ that can be heard where the progression is major keeps you smiling.

Yet for lovers of music in a minor key, the verses belly a story that you can hear is emotive. Once again I look forward to finding out more from Larry.

From the title of the track, I can imagine a little from the English translation: Stop Lies.

Wind instruments dance with percussion and instrumentation, and with that, we are left feeling that we want more from Larry Maluma.

More music, more stories. Indeed, the story behind this album which can be read inside the hard copy of the album is quite a story.

The album was started in 2016 with Larry writing the songs with an acoustic guitar.

In 2018 Larry returned to Zambia for a family trip so that his children could see their grandmother, and missing a flight back spent a little longer there. That would be the last time they would spend with her.

Returning to his home in Melbourne, Larry began recording all of this material that he had been working on at Woodstock Studio.

In 2020 the words of Bush Doctor / Traditional Healer would come to align with both the Black Lives Matter movement as well as the global pandemic.

In 2021 Larry faced his own health complications yet came through it, having had a bowel tumour removed and recovering to go on to release this album.

More to the story can be read by purchasing the album. Here at Paradigm O we were very relieved to hear of Larry’s recovery and thrilled to hear this album.

We will be holding a listening party in our local area, and anyone who lives locally to Castlemaine/Dja Dja/Wurrung/Djaara/Jaara country should drop us a line.

You can listen to the full album on Spotify here, but of course, the best way to listen to the album if you can is to support the artist directly by grabbing a digital or physical copy from his website. Details below.

Support Larry Maluma by purchasing his CDs or Merch online through his webstore here.